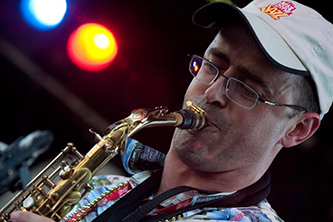 Greg is a native to Salt Lake City, Utah and earned his BA in Music from the University of Utah in 1996. In 2002, he graduated from The New England Conservatory in Boston where he received his Master of Music (Jazz Performance) under the instruction of virtuoso tenor saxophonist, Jerry Bergonzi. While in Boston (at NEC), Greg studied with several of the industry’s long time giants (Cecil McBee, Allan Chase, Mulgrew Miller, George Russell, and played lead alto in the Bob Brookmeyer Big Band) while simultaneously performing with the outstanding up-and-coming voices in jazz. In December 2002 Greg was a featured soloist with the Boston Pops under the direction of the legendary John Williams.

Greg’s outstanding jazz performances have delighted jazz enthusiasts literally all over the world. His performances at the Montreaux Jazz Festival in Switzerland, various locations in France, coupled with his cruise ship “around-the-world” voyage, exposed his extraordinary talent to an international audience. In February 2001, Greg was the featured guest soloist with the great Billy Taylor and his trio on Billy Taylor’s “Live at the Kennedy Center” radio program, a performance that was broadcast on National Public Radio. Greg also worked as Production Manager under his father Jerry Floor and Mayor Ralph Becker to help produce The Salt Lake City International Jazz Festival. Now in its 17th year, the festival has grown into a local and national tradition and is receiving national acclaim by spectators and artists alike.

Greg has two solo CD’s with his group “The Greg Floor Quintet”. The first, “The Grand Inquisitor” (1997, Four Floors Productions), features Los Angeles pianist Tom Garvin, debut’s Greg’s talent in composition, and has received national airplay. The most recent recording, “Uphill…Both Ways” (2002, Four Floors Productions) received great reviews. Both recordings feature Greg’s synthesis of his ethnic Greek heritage with traditional jazz resulting in an exciting fusion similar to that of Latin Jazz. Greg is currently arranging and composing the music for a new project that will feature his father Jerry, his sister Emilee, and a plethora of other musicians that have collaborated with the Floor family over the last 20 years to be released in the summer of 2017.

Greg has been a featured soloist with the Utah Symphony and the Boston Pops, is a regularly featured soloist with the Salt Lake City Jazz Orchestra, and has been spotlighted with his quintet in many other jazz settings. He has backed many jazz artists and entertainers to include Nancy Wilson, Phil Woods, Eddie Daniels, Maureen McGovern, Ray Charles, Kenny Rogers, The Four Tops, Ray Brown, The Temptations, and many more.

From 2005 to 2008 Greg was on staff at the University of Utah where he directed the Jazz Ensemble #1 and multiple small jazz combos, taught the masters level improvisation course and instructed private applied saxophone students. He also was an adjunct professor at Snow College and Westminster College. In 2010 Greg was invited by the University of Florida to be on faculty during a weeklong jazz camp hosted by Gordon Goodwin and his Big Phat Band.

Greg and his new family currently reside in Boston, MA where he works as the Director of Admissions at Hellenic College Holy Cross Greek Orthodox School of Theology from which he graduated in ’05 with a Master of Divinity degree. He continues to perform in the Boston area and with the Boston Pops as well as make frequent appearances for performances in his hometown of Salt Lake City. Greg enjoys teaching theory and improvisation lessons for all instruments privately and he combines clinics with his concerts when performing at high schools and colleges.