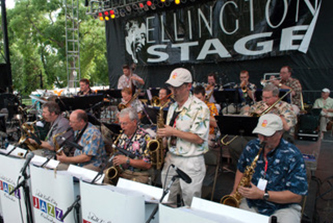 Greg Floor, (Boston Pops Orchestra) returns to take a seat in the sax section with his father, Jerry. Greg’s sister, Emilee, will also be featured with the SLCJO. Emilee is currently living in New York City and recently finished a nine-year run at the Waldorf Hotel, now closed for renovation. Among other venues, Emilee can be seen/heard performing on occasion at the Carlyle Hotel in New York.

The SLCJO has backed entertainers to include Seth Macfarlane, Doc Severinsen, Johnny Mathis and many others. They also include a host of jazz performers like Phil Woods, Eddie Daniels, Nancy Wilson, Clarke Terry, and maybe four dozen more.

The SLCJO is Salt Lake City’s “Lab Band” as well. The band invites music students and composer/arrangers to bring their skills to the rehearsals for educational purposes. The eighteen piece SLCJO is a major music force in Salt Lake City and Utah.