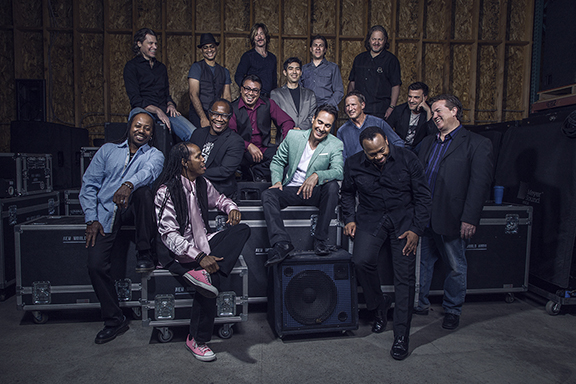 Santa Fe & The Fat City Horns are one of the most exciting, versatile, and creative bands on the scene today.  Formed in Las Vegas in 1999 by vocalist/guitarist Jerry Lopez, SF&TFCH are a collection of the finest musicians in the city – musicians who spend much of their time backing artists such as Celine Dion and Donny & Marie Osmond, or performing in shows such as Jersey Boys and Rock of Ages. While definitely old school in their approach to live performances, SF&TFCH are very original and new in their musical conception. Clearly influenced by horn bands of the past like Earth Wind & Fire, Tower of Power, Chicago and others, this band has broken down stylistic barriers that confined other bands, and refined a sound that has aspects of funk, jazz, latin, pop, and rock, while ultimately sounding like no one but themselves. This is largely due to the unique makeup of the band:  five distinct lead singers, a six piece horn section, an incredible rhythm section, and several different songwriters and arrangers, all of whom come from varied personal and musical backgrounds. Some are college educated jazz musicians, some are street trained funk players, but they all have these things in common:  an intense groove, a perpetual creative spark, and the unbridled joy of making music together as a cohesive unit. This melting pot of talent led to two thrilling live recordings; “Live” in 2005, and “Let The Healing Begin” in 2007, and two remarkably unique and satisfying studio recordings; “When The Curtain Goes Up” in 2009, and “The Answer,” released earlier this year.  Enjoy the recordings, but to really appreciate Santa Fe & The Fat City Horns, you must see and hear them live in concert – there is no experience like it.