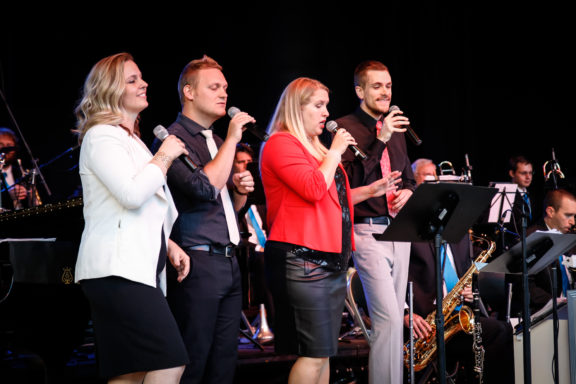 Katrina Cannon is an experienced vocal soloist that has performed for the SLC Jazz Festival, Utah Arts Festival, Park City Jazz Festival, numerous Excellence in the Community events, as well as hundreds of private events across the Wasatch Front for the past fifteen years.  She has performed with many jazz combos, The Salt Lake City Jazz Orchestra, CityJazz Big Band, Tad Calcara’s New Deal Swing, Wasatch Jazz, Stratford Street Big Band, and most recently with her own band, Night Star Jazz Orchestra. She has also done studio work for the Waterford Institute and works as a vocal coach in the community.  Katrina had a passion and gift for singing at a young age. She performed and soloed with the U of U Acapella Choir while in college, touring Europe. Her jazz and blues solo work is widely known, but she has also missed singing in a group. She created Vox Nuvo, finding accomplished friends and challenging music, to present the harmonies that only a vocal group can create.

James Densley sings tenor in Vox Nuvo. James’s jazz experience began when he was 6 years old and he would tag along with his mother to her gigs as a big band singer, and would often sing jazz standards as duets with her. By 8 years old he was singing tunes on his own with the band. James received his bachelors of Music Education from BYU-Idaho in 2016. While there, he sang tenor in BYU-Idaho’s vocal jazz group, Vocal Union, under the direction of Nori Brower. As a member of the group, he was often called on to sing solo tunes with Sound Alliance, BYU-Idaho’s premier big band, under the direction of Dr. Mark Watkins. He also played drums and vibraphone in university jazz combos, as well as tenor sax in the big band. He studied with drummer Kobie Watkins, trumpeter Dr. Ryan Nielsen, bassist Dr. Aaron’s Miller, and pianist Justin Nielsen. He has performed heavily in the pop, and soul genres, as well as jazz. James is currently the Director of Bands at Fremont High School in Ogden, UT.

Lisa Dengg is an accomplished big band vocalist in Salt Lake City, with a passion for the music of Natalie Cole, Ella Fitzgerald and many others. Lisa studied private voice at the University of Utah, where she was a favored soloist of famed choral director Ed Thompson. While in A cappella choir, she performed at Abravanel Hall, as well as multiple venues all across Europe. Lisa also had the privilege to perform at Carnegie Hall under the direction of Choral Master Robert Shaw. Lisa has soloed on the Jon Schmidt Christmas album and is the Soprano on 3 CDs with the vocal jazz quartet Crosstowne.  Lisa took a sabbatical to raise 3 boys but reunited with friends to perform with local big bands including the Phoenix Jazz and Swing Band, Stratford Street Big Band, the Wasatch Jazz Project and Night Star Jazz Orchestra.

Davis County native Tanner Linton sings bass with Vox Nuvo and has participated in the vocal jazz world for several years and is thrilled to have this opportunity to sing. After getting his feet wet in vocal jazz performance in high school, he sang as a member of the BYU Jazz Voices during both undergraduate coursework and a master’s program. As both a group member and alumnus, he has contributed several original arrangements to the Jazz Voices repertoire for live concerts and recording projects. He has degrees in linguistics and foreign language and works as a university educator and translator.”